Next will keep developing it, setting up the bandana, fingers, nunchuck, as well as use more proper collision geo and setup the limits as well.

I’ve also setup the nunchuck ragdoll and did a small spinning anim test on it in about 1.5 hours.

I had to setup the markers on the joints and then retarget them to the controllers.

Very cool! For the nunchucks, this is one of the few cases where you don’t want any pose stiffness at all. Without pose stiffness, they will act like metal rings linked together - as opposed to fleshy limbs connected with cartilage - which is exactly what this is.

Two additional things I think they will need.

Here’s another nunchuck ragdoll anim test setting the pose stiffness for the metal rings to 0 and adding distance constraints between them.

Hm, I’m not seeing the stretchiness or losing their metal shape in the videos above?

This is the most physically accurate result, but physically accurate isn’t always the best-looking result. Pose stiffness will help keep it under check without breaking realism too badly. Could be that the chain is old and rusty, causing a lot of friction between them and making them act more like a thick rope.

Put in more time in my Mikey RD setup.

Created better geo for the plugin shapes to more closely represent the character.

And finally setup limits for every marker.

For the bandana tail I also setup some distance constraints as its very light cloth with a few joints along the length of the tails.

Made a test making mikey fall asleep from being so exhausted from his training with pose stiffness value of .01

That looks good, thanks for sharing. Are the feet Kinematic, or are they stationary simply because they are so large and heavy? Would be good to see more kinds of drop tests, like different angles and maybe dropping him down a flight of stairs or a sculpted Environment mesh.

What are your plans for this character?

All the markers were set to dynamic in that falling asleep test, but maybe my limits aren’t allowing for the feet to have enough rotations.

I made this drop test with him holding his nunchuck with an attach constraint from the nunchuck handle to the hand control.

The nunchuck does show me that it stays inside of mikey’s hand when viewing the Rd plugin shapes like below.

But, after baking, the nunchuck handle doesn’t stay inside mikey’s hand throughout the range of the shot.

@marcus what would be a proper way to make sure he holds his prop in his hands? I’m not keyframing any of the nunchuck controls apart from the one that Rd auto-creates on the first frame when baking. I’m just relying on the attach contraint to let the nunchuck do it’s thing based on what happens to mikey.

@marcus what would be a proper way to make sure he holds his prop in his hands?

There are a few ways.

Other than that, if they still stray away from each other, you can experiment with lowering the mass of the nunchuck, to make it less likely to pull on the arm too much. Then you can try increasing substeps to see whether the solver is trying to achieve what you want but isn’t given enough time.

To double check, are you saying the nunchuck separates only when recording, and that they are stuck together during the sim? It’s hard to tell. If this is a rig or recording issue, then that’s a different story.

I tried using the weld constraint, but I get an error saying that my solvers aren’t linked although they are. 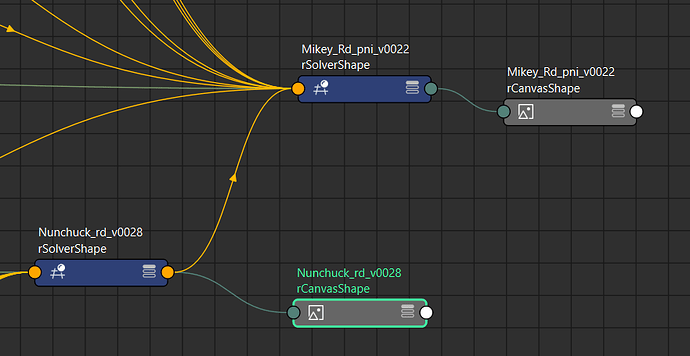 Ah, smells like a bug. Patching this for the next release.

You can work around it by not Linking but Merging the solvers instead. It’ll have the same effect, except they won’t be un-mergeable later. It’ll still work on two referenced assets.

After merging the solvers, welding works, but it’s a destructive workflow, as I prefer the link the solvers method.

The nunchuck chains are stretching too much and the loose end of the handle is spinning too fast and wildly now though.

The bandana tails work quite well though, getting its secondary motion for free from the sim.

Here’s another test using the Pose Space set to custom workflow having mikey get bopped in the head by a nunchuck, falling limp, and then quickly popping back up to his initial pose.

Mikey ragdoll Plugin Shapes getting bopped in the head playblast

Mikey ragdoll getting bopped in the head playblast

The nunchuck chains are stretching too much and the loose end of the handle is spinning too fast and wildly now though.

Yes, likely a problem of mass.

The ends of the nunchuck are far heavier than the links, so they struggle to hang on. You can work around it by manually setting their masses.

Now they’ll behave better, but may be too heavy or too light compared with the rest of the character. So try different values, 0.1, 1.0, 10, 100 and so on until it feel right.

Alternatively, you can increase the time that Ragdoll is allowed to solve the simulation, since this is a problem of performance. Increasing substeps and iterations will likely solve it as well, but will cost more CPU.

Thanks, will play around with density set to 0 and control the nunchuck with mass instead.

I do have another question regarding FK and IK setups.

This means depending on how I want to animate, I need to have one ragdoll rig that has it’s markers on FK controls.

And another rig that has it’s markers on the IK controls correct?

There currently isn’t a way to support combining ik and fk markers in one file?

Not quite, a marker can record to multiple controls at once. So you’d keep the marker that you already have, and append another control to it.

Have a look at the Retargeting videos.

So I was able to make the mikey ragdoll setup work with arms and legs set to be in either fk or ik mode.

I first re-assigned the legs and arms markers onto the ik joints.

Then I appended the ik controls onto the markers corresponding to the ik elbow and knee pole vectors as well as the hand and feet ik controls.

I had to re-create the ankle geo I used as the marker mesh because it got a weird rotation when I re-assigned the ankle marker onto the ik ankle joint. 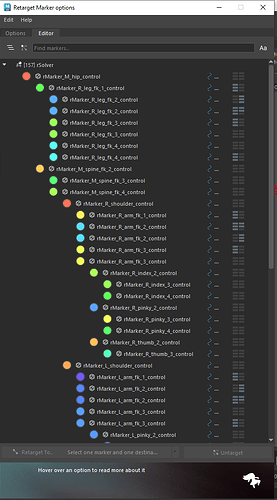 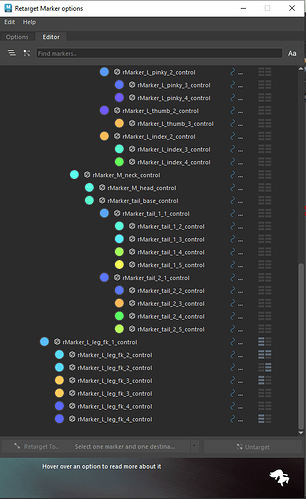 Though the appended controls kept the same name that it auto-generated when I created the initial markers on the fk rig, so it’s kind of difficult to visualize which is the fk or ik controller connection.

so it’s kind of difficult to visualize which is the fk or ik controller connection.

One other option you have to drill into the exact targets is to look at the Maya Node Editor. It will draw the connection between a Marker and each of its outputs.

You can also disconnect and make connections here manually, and also via Python. This is what the Retargeting command does.

Ragdolled a skateboard for mikey to interact with.

I have the wheels pose stiffness and pose damping set to 0, and I locked the limits for y and z rotations.

I expected the wheels to rotate down the ramp getting the spinning motion for free, but that isn’t the case.

Is it possible to make wheels rotate based on a pushing or sliding force applied onto the board?

Is it possible to make wheels rotate based on a pushing or sliding force applied onto the board?

Yes, the trick is making sure the pivot around which they rotate is at the centre of the wheels. If you think of the skateboard as a character, then you can:

This would make the wheels connected to the board, with the pivot at the natural Maya pivot of the wheels. Where if you selected and rotated a wheel should be at the centre.

If all else fails, make a new Maya Cylinder for a wheel, don’t freeze the transforms (because you want to keep the pivot at the center of the mesh) and use this for a wheel.