hey guys!
After digging on Jason’s file I wanted to try some similar application, based on some mocap cycle. (mixamo.com)

Also any other tips are welcome !

Hi Andrei,
Is it Halloween already?
I’ve been playing around with some ideas for giving the ends of limbs more SUPPORT almost like helper markers that act like pins or world space…BUT are in local space that will let the character simulate correctly.

Here I used the last joints in the fingers to make some ‘markers’, they will follow the animation of the hand.
I then used a distance constraint from these end markers to the tips of the fingers. 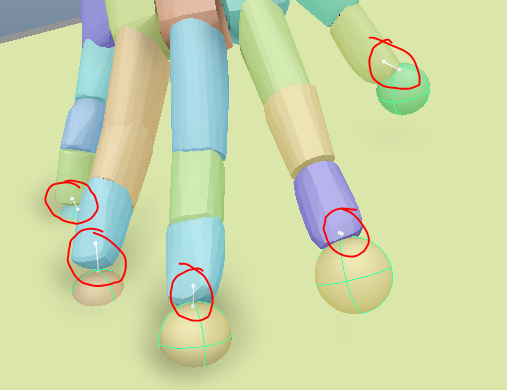 For this example I turned the Support markers to not collide, you could have them collide but since these extend past the ends of the fingers the contacts of where the fingers might be would be showing a gap or push the finger tips away. 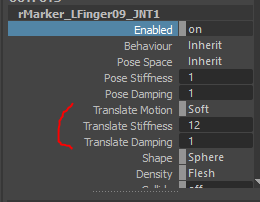 Is this something that might work? I could do a more extensive breakdown .

Here’s a test I did with the rhino leg… without support I get some bending I could up the pose stiffness quite a bit, It’s something we’re playing with.

Thank you guys ! @Jason and @isai

now that I have this baked on a Layer, I am thinking is a good moment to RUN one more SIM and see what other details and smooths can RagDoll add to the scene. Any TIP?

A bit of staging for showcase 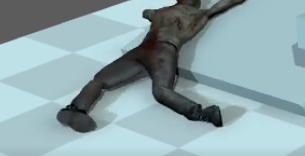 It looks like Pose Stiffness = 0, which would allow limbs to twist infinitely. To roll around itself, like it’s doing on it’s way down.

Typically, for any ragdoll that is completely knocked out, you’d still want some stiffness. Something to keep muscles still connected to the bones in your body. You’ll notice that every limb in everyone’s bodies have a “preferred angle” when completely relaxed. It’s the angle they get when every muscle is at their natural length. For example, the angle between upper and lower arm is around 45 degrees. That’s a result of the bicep pulling on the arm being slightly, and the tricep also pulling on the arm slightly. They are basically both too short to keep the arm either completely extended or completely contracted. And it’s that tension that keep the arm at 45 degrees with some Pose Stiffness.

The same is true for just about every body part.

On top of that, there does not appear to be any limits in this character, which would also help prevent unnatural angles like the knees and feet here. Muscles do their part in keeping things at a preferred angle, but our bones do what muscles cannot, like prevent this twisting motion.

So as a simple improvement, leaving some Pose Stiffness - whilst ensuring the animation has come to a stop, keeping a static pose - would resolve the twisting issue and generally make it look a little more believable. That could then be taken to another level with limits, at least for elbows and knees.

With regards to the pins on the hands, have you tried achieving this result without pins? E.g. just leaving everything local and see where the animation takes him? You could potentially have a very very gentle pin on the torso to guide him along. At the moment, it seems to me that the hands are pulling on the body bit much.

Did some tweaks and the stiffness was improved
Worked the Limits on the Legs and also, RUN and additional SIM after the first Bake

I do still need to play around more with the Soft Translation to understand better and get the best of it.

That does look quite nice.

The biggest standout to me is that last yank of the arm, where he flies up on that platform. Other than that, gravity seems a bit low at the end, as the platform is lowered. Like he’s on the moon. The hands look somewhat uncontrolled/stiff, and that last angle of the upper arm looks like it broke his clavicle. Although that might not be completely unrealistic considering it’s an undead dude

I wonder what would happen if you removed the Rotate Stiffness from the pins holding onto his hands? It would allow the hands to remain aligned to the arm and potentially avoid some of that IK-look.