Hello, we’re seeing some users report that Ragdoll is continuing to find Trial licenses after we set up our shared license server.

Is there a setting that could be lurking about their Maya prefs that’s somehow marking them as trial users still?

Hi @jstrong, hm, I got a report earlier today about a similar-sounding issue.

Can you confirm whether this works for you:

This should work, without being limited by 100 frames, is that the case?

If so, save that scene. And open it. Are you seeing a popup/balloon appear, mentioning something about downgrading your licence to Personal/Trial?

If so, you might have gotten stung by this bug.

There is a link to a downloadable version with a fix in that link, and every newer version since will have had this patched up as well.

Edit: Does your licence server acknowledge the leasing of licences? Can you tell whether it’s responsive at all? It should say something along the lines of…

I tried the steps. Things work perfectly well for me, but I never saw the issue. I’ll pass the steps to the user running into the problem.

Ok, great. And in the off chance that it’s a simple configuration issue, make sure the users having the problem can run this - in a Python tab of the Script Editor.

It should not throw an error, and should print out the address to your local licence server.

Thanks, I’ll give that a try!

The user tried removing all ragdoll nodes in their scene and starting over from scratch.

It worked for a while, until their scene crashed. Upon restart, they’re getting trial messages again.

Would it be possible to show me a screenshot of this message?

The user is reporting that when they just open the scene and try to hit play, they’ll get warnings about the license being expired. The license window says “Trial has expired Expired: 15 June 2022”.

However, if they run our tool that registers/loads the plugin, then things work.

What needs to happen is for that variable to exist before launching Maya. I suspect this is what your launcher does.

If a user were to, for example, double-click a Maya scene from Windows Explorer, the variable would probably not be present, or is present after having loaded the Ragdoll plug-in.

To work around this, and possibly solve it and call it a day, your users can manually add this variable to their system. Since I think you are on Windows, here are some Windows steps.

Here’s where to find the Environment window, from the Start menu. 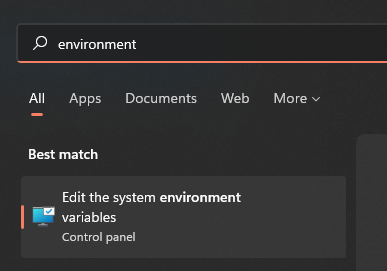 And here’s what to add.

Thanks! I think we’ve got everything sorted now!

Inserting the envar into our setup process seems to have fixed the problem.