Hello
I’ve been playing around a little today with the rig and pins. I don’t really have a plan yet as to where my animation is heading, but so far it’s been fun. Here is a clip of the crab doing a bit of a twerk.

And the first prize goes to… hahah glad you having fun! twerk off it is!

Welcome to the forums, @emi

How was your experience putting this together? Did you make your own markers for this one? I can see what looks like some markers coming through around the chest. Also, are those eye-lashes?

Hi Marcus, sorry for the late reply, it’s been busy!

I made some markers for the heels and the pole, I used the provided rig for crab-ina though.
I tried to give her a face, the camera angle probably isn’t very good

maybe you can see here - 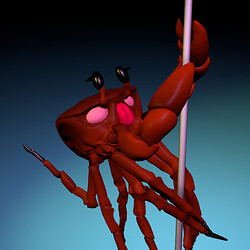 I suppose I didn’t really choose the best idea for your tool as it’s more of a choreography than body mechanics, but here’s my take on it!

Working with ragdoll - it’s a new workflow, so it takes some getting used to.
Posing in Fk was a lot of work, especially when doing slight tweaks on the body, I used some Ik handles to help pose the crab, and deleted them once I had the pose I wanted, or baked to Fk before recording simulation, as I was using the twist attribute instead of a pole vector. It might be nice to have record simulation be able to bake onto the roll attribute also.
-Using the pins and snap to simulation to pose the crab was a good option, but after using it several times, for example while posing the body with pinned legs and tweaking the body, the sculpted shaped of the legs from the initial pose became warped from simulating them many times, and I had to re-pose them to get a better shape in the simulation.

Initially, I was aiming for snappier movement, I tried animating the scene time scale and scene scale.

Some of the values for constraints were really high while others showed nice results from 0-10 , all the markers had the same pose stiffness, dampening, etc. - Could this be something to do with the scene scale?
Animating in and out of the constraint felt more like a switch than a smooth transition, maybe because the constraint values were so extreme.
With attach I was getting strange results when moving the attached target object (double transforms on the locator shaped constrain) when the attach constraint wasn’t set to 0, which isn’t by default.

Because I was spinning the crab around in Y in world space and using a pin on the body I was getting gimbal locked quite often, I think I changed the rotate order on the pin to zxy or xzy to help with this.

Recording the simulation was very easy, but depending on where I put the start frame, the simulation slightly varied, so I played around with the start frame a little to find one I preferred.
I think it might be useful to have an option to bake the simulation onto the base layer and keep unbaked keys so that the bake doesn’t override the keys on the entire frame range- I ended up baking onto a later and animating the weight in and out before merging the layers to achieve this.

I had a strange error with the lights. If I had more than 3 lights on in the scene at once my crab rig would fly all around the place, the ragdoll solver remained the same though so it might have been a thing with the crab.

I think I agree with what Kae mentioned that it’s hard to art direct. Whenever I changed anything on the rig, of course the simulation changes.

But, overall, I think it can be very fun once I master it! I was a bit precious with my poses when I started animating the crab so it was a bit frustrating that they were changing all the time, but by the end I found a lot of joy in the effortless, accurate movement that comes from it.

Thanks for sharing these thoughts @emi! I’ll make a proper reply to this in the coming days, in the process of packing bags and preparing for an international flight as we speak.

no worries:) have fun at Siggraph!