Hey guys! here is my animation for the Agora challenge!
Hope you like it!! (it still needs lots of love)

Would it be possible to see the Markers? And the input vs. output result?

Hi Marcus!!
First of all, as I mentioned before, it was great meeting you and the Ragdoll team at Siggraph!!
And sure, here are the markers from the first shot with the Lizzard!
For this establishing shot, Ragdoll was super great to create all this secondary motion on the body, finger claws, tail, and toes ground contacts!

For the second shot, I wanted to create some debris for the Robot to come out and have this “heroic entrance”.
So, I just basically took some random geo, place up in the air, and then, I Ragdoll it!

And finally, this is the final part with the characters.
This one was suuuper tricky because at some point the Robot arms and fingers were exploding while coming out of the debris, so…
Firstly, I used a sphere to have the proper trajectory. Then I just parented the Robot to it and dropped some poses.
Then, I did a first pass with the Robot coming out of the ground, then I baked the debris and deleted the markers (because I increased the substeps and iterations, the scene was a little bit slow). Now with the clean scene, I just focused on the character’s markers and all worked out!

Excellent, thanks for sharing these! Just returning from holiday today, and will be a little more active around here from now on.

Firstly, I used a sphere to have the proper trajectory

Hihihih, this is not actually a correct trajectory.

It’s subtle, but rotations of the body during flight happens around the center of gravity, and that center changes with each change of the pose. In this case, I’d venture a guess that the sphere is represented by the hip control. Which is very rarely actually the center of gravity. That’s why when he rotates his arms and legs whilst in flight it feels a bit disconnected and lightweight.

In reality, if you threw the character in the air as he animates, you would find the hip trajectory to vary - sometimes a lot - and not look like the trajectory of a ball. The center of gravity is in this case somewhere in front of the belly. Especially when hunched over towards the end.

There will be more tools to visualise and help with this in the future, it’s one of the little things about airtime that is subtle and very hard to get right!

Dear Marcus, really great you had the chance to take some time off, and welcome back!

Yeah!! Definitely, this shot still needs tons of love (even the render)! With 2.5 days of work, there are lots of things to tweak! I have a long weekend here in Van, so I’m hoping to polish and address some stuff that is making my eyes bleed, including the center of gravity that you correctly described.

About the trajectory, I’m just curious, if I’m not mistaken, the trajectory of an object is “the curved path of the object in respect to its motion along with the gravity”, right?

Because Ragdoll is pretty cool at handling physics and of course gravity, I decided to Ragdoll a sphere to quickly draw the proper parable, so the curved path was accurate. So, now that you are mentioning the trajectory is not correct, I’m wondering, why does the trajectory path is incorrect if the parable is being calculated by Ragdoll?

An excellent question! I will get back to you on this one next week with some examples once I’m back at my computer.

I’m wondering, why does the trajectory path is incorrect if the parable is being calculated by Ragdoll?

Allright! Let’s take a closer look at this.

Here’s a guy jumping and changing pose mid-air. Notice how this isn’t a very smooth trajectory. It doesn’t quite look like that of a simple sphere. Why is that?

The interesting bit is the one here. 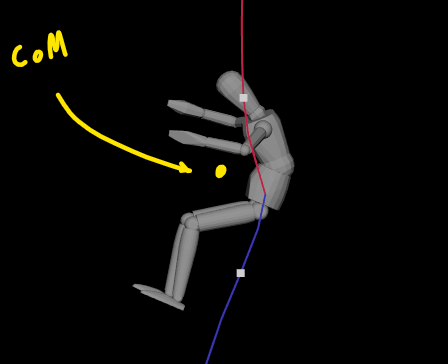 If we were to plot the trajectory of that point, instead of the hip, we would be getting a trajectory just like the one you are getting for a sphere. At the moment, Ragdoll can’t actually show you where this center is.

Which makes it a little tricky.

The key insight is that the trajectory of the center of mass would be unaffected by changes to the pose. That trajectory would be a perfect parabola just like the one you get from throwing a sphere. And so the reason you can’t pre-compute this path and constrain your hip to it is because:

Ragdoll will be able to visualise this center of mass, it’s on the roadmap. I’m hoping it will appear a release or two from now!

Does this make sense?