Finally, after 20 years I will make justice to the inspiration that Sentinel gave to my entertainment !

For now, I just managed to do a quick Set up and Modeling / adaptation of a model that I found , (The model also made justice to those 20 years… it is all Nurbs modelling) I did remodel the tentacles and clamps. 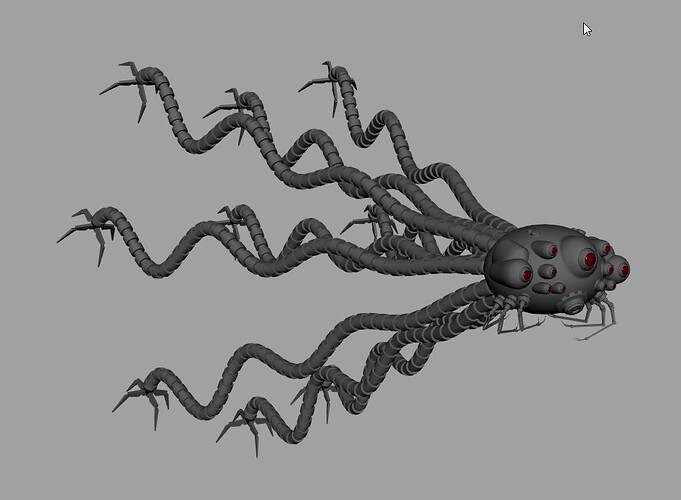 Sharing q quick posing and interpolation test of the RIG that I built for this “Asset” . "procedural animation:… Love it ! the Power of bend and Wave deformers

First pass on the RD set up…

ADDING quick DEMO of the RIG.
this Rig was built based on Deformers Bend + Bend + Wave …

This is going to look awesome!
Soo many different ways to set it up, really depends the kind of action you want to do.
the ends I would have in custom space or a pin constraint just so you can control where they’ll be- can also animate them back to local space or animate the pin constraint off
I’d do the same for the main section - custom or pin

If you want to go more advanced… I’m using markers at the ends of dynamic chains to support the limb… so having a marker that’s parented to the end of the tentacle so it moves with it - Reparent that marker to the main body. and make sure these support markers are Translate Motion = soft
I then distance constrain the ends of the tentacles to these support markers and hey presto you got something cool looking…

This video is easier to see what’s going on… The ‘Red’ cubes are soft transforms parented under the root of the character so they will always move locally where my creature is. I’ve made distance constraints from those red cubes to the tips of the tentacles so they get pulled along where the red cubes are doing… and where is that… to the mouth

In addition to all of the ways it can be done, I can spot a few ways in which it probably should not be done.

Primarily, in your current simulation, I can spot capsules which are far too small, with a far too deep hierarchy. At least for the general motion of the limbs. It’s enough for really accurate contacts, but such a deep network will make it extremely challenging for the solver to match your poses. Normally, for a human, the hierarchy is 4-5 levels deep.

And even that’s enough to struggle with getting the hand to match the worldspace position of the animated hand, given forces will need to pass through each of the previous levels. Add fingers on there, and you’ve got upwards of 10 levels.

In this case, each tentacle appears to have upwards of 30-50 levels? And on top of that they are very narrow? I think you’re going to have a bad time.

So what I’d do is focus one simulation on the overall motion of the tentacles using only 4-5 levels of hierarchy, and then run a second pass with higher fidelity (if you even need it) where each individual narrow marker is pin constrained to the first simulation to solve for additional contacts and the like. 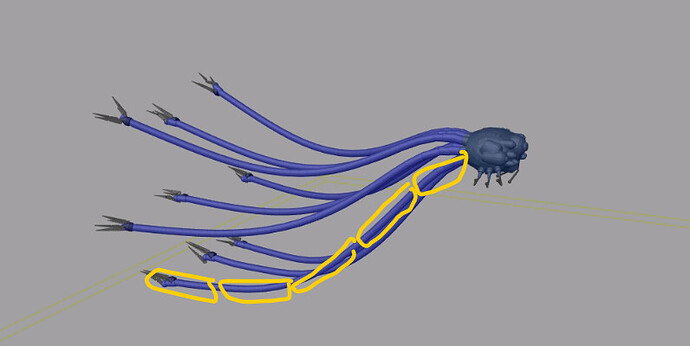 Quick WIP of the file I’ve been playing with.

In this file I am testing/ learning to control these crazy tentacles… and for that, I did some animation and switch to Dynamic behavior for the fall down…

Still lots to play/fix and learn…

It got zapped by that EMP!
looking cool! don’t be scared you can totally have these tentacles be sim throughout- Play with some air density and a pin here and there . I’m using helper makers at the end of my tentacles that are reparented to the body for the spaceman showcase. Give it a go, it will keep your claw animation relative to the body rather then pinning it in world space .

This video is easier to see what’s going on… The ‘Red’ cubes are soft transforms parented under the root of the character so they will always move locally where my creature is. I’ve made distance constraints from those red cubes to the tips of the tentacles so they get pulled along where the red cubes are doing… and where is that… to the mouth

finally, this is start coming to a more organic and nice approach.

In this case Base on a “Key Pose” and using a bit of the Wave offset that I built into the rig I managed to control better the rig.

For this test I did lower the gravity a lot … to -10 , also added “uniform Field” parented to my control to create a bit of tension on the motion.
Tentacles are GRP each one on a single GRP DYNAMIC/LOCAL/SOFT

Nice! it’s coming together! the new version is going to help with my complicated way of putting the ends of chains in parent space …

" Sentinel is back on track"…!!! It was a Deja Vu ! … nothing better than re-doing the work to really learn it and fix the issues. !

Re did the GROUPS, and all the markers for the Clamps and ends… it kind of clean the mess that I had before…(deleted also all the distance and Pin that I had before)
now this is how my Ouliner Looks ! Clean and neat… (My wife wishes I do the same with the room… lol) 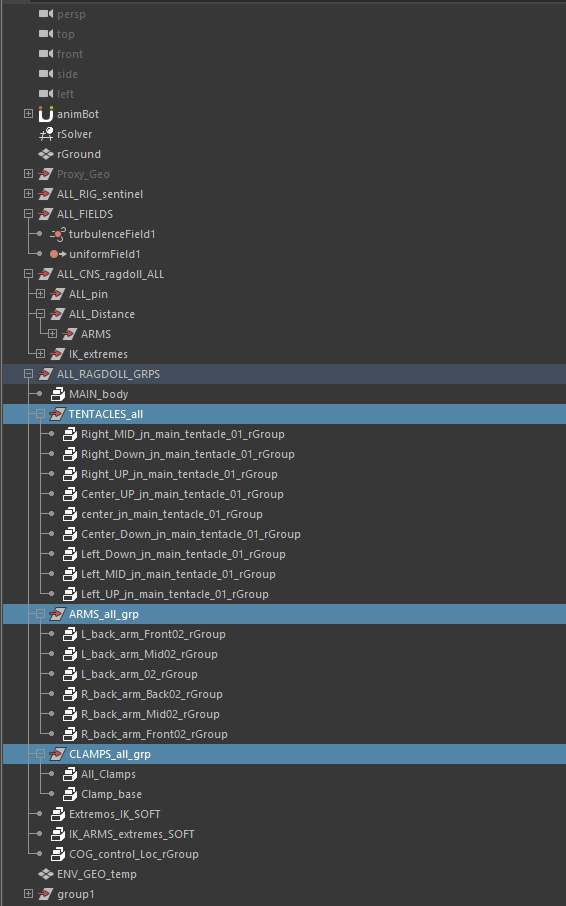 Besides the COG animation, This animation has only One Pose / One Turbulence and One Uniform. On top of that the Offset of the wave is subtle animated to give some extra motion

Mr @Jason and @marcus I built the set up with the extra markers parented to the Main Joint ,“External Markers” to help control the positions and also played with the Lower gravity and high AIR density ! it does the job…
… one question for you… As you can see the “clamps” are still being affected…
I have the clamps on CUSTOM / 0 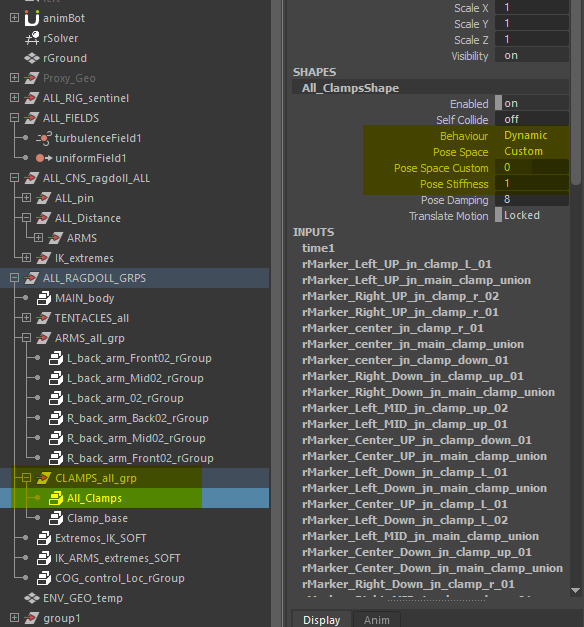 What’s the best workflow to make the clamps copy the animation (rotations) but not to affect the Translations… as if I use Kinematic on them, it will cause the tentacle sticks to the position.
I’ve been playing with the Advanced Pose / World Translation and World Rotation but I don’t hit the nail yet!
This part is still a bit confusing to me… Like “Keep the animation of rotation but free the trasnlations”

This set up has built a couple of the thing you Shared/Demo before
1- Main Body “head” is PINNED to control it
2- End of the Tentacles Are using the “External Markets / SOFT to help them” (Nice custome attr I built in the RIG to make those end follow the COG or the Master (Orientation and Rotation) this helps a lot
3- Lower Arms , have same set up external Markers /“SOFT”
4- I used Distance CNS to constraint those markers…(Would you stay with Distance?)

I managed to control better the Clamps and also the union of the Clamps and the End of the tentacles…
This is finally coming together ready to do some animation shots.

I did some WELD constraints and also added an additional layer of External Markers to be able to tweak the SIM / animation on the fly !.

1- How can I turn off the proxy Mesh /Wire mesh f the PIN?
2- How could be a more accurate way to use the Kinematic but ONLY the rotations?.. Like an Orient Constraint… I did use the Advance parameters and played with the Damping and Air resistance to make them mirror the animation keys. 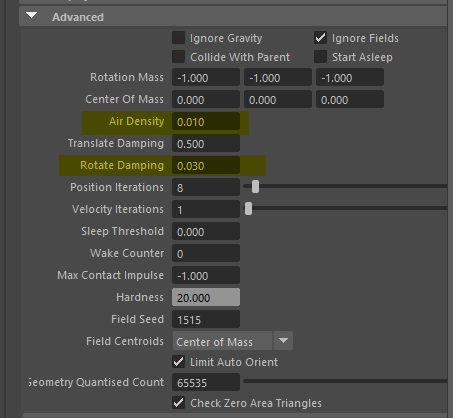 Cheers !!! Finally, this guy sees the light at the end of the Tunnel!

I am getting this Sentinel Ready to apply some locomotion.
This is just a quick idea of how it could work…
I am kind of building all the set up with the different possibilities…

Oooo Yea! this is going to look neat!

I did start testing and creating some interactions…

To hide the Proxy mesh of the Pin:
From Marcus:
“it looks like you can hide it in the outliner, and then de-select
It should hide it
Looks a little flakey, if you hide and unhide the solver as well, it should force it”

I suspect the clamps are lacking strength. Like they’re not responding that well to the Pose Stiffness attribute. I would not use Shape Type = Mesh for those, the meshes are very thin. Instead I’d use capsules, and align the them to the bottom of each clamp, such that collisions are still somewhat accurate. But then make them thicker; the thicker they are, the stronger they become.

How could be a more accurate way to use the Kinematic but ONLY the rotations?.. Like an Orient Constraint… I did use the Advance parameters and played with the Damping and Air resistance to make them mirror the animation keys.

You’ll want to lower the Pose Damping and increase the Pose Stiffness to get closer to the Kinematic look, because Kinematic itself doesn’t work that way. This would be a way to emulate it.