Recording Markers that are driven by a Curve

Hey @marcus … I came across this Bump…

let’s say I have the markers “riding a curve” driven by a curve using motionPath.
I do retarget all of them to transfer that position to come Anim_Controls, (Same number same position, but not attached to the motion path, basically free controls or FK hierarchy)
so when I do “record” expecting that my controls snap to the SIMULATION, they “explode”, as if they are inheriting double transformations somehow…

I was able to extract the simulation and transfer it using the Utility / Extract … and then I did point constraint of my markers. It works to me… but I thought it was a good “bump” to flag and see if you think in something that could fix it.
Having the chance to use ragdoll to retarget and transfer animation is one of the Powers that could be explored more.

Hey @Andrei_da_02, a video of what you’re seeing would help here.

Here’s what you should be seeing.

Recording with a constrained kinematic Marker 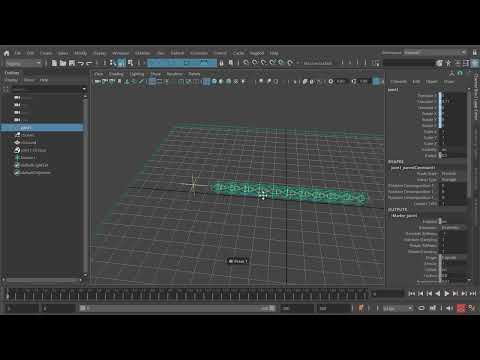 I will record a video of what’s happening because this is not the case…It happens when the marker is “riding” on a Path. But the Marker is inside and offset group to allow the SIM to enter keyframes.

My bad !!! still thanks for your video, they helped me.

I went and re did some of the SetUp… I figured that
a- I was missing a connexion/ by pass that allowe the controls to be shapes same as the curve.
b- on switch to make it Curve dependent or free
c- World Bake before I do the Swtich

Now I figured it… It is an absolutely nice Dinamc Set Up!

a- Markers are being driven by a Curve that I can Pose freely .

b- SIM recorded , Animation Transfered to the ANIM_controls

c- ANIM controls WorldBake to lock the deformation: (of the master curve)

d- Created the Switch to ON /OFF the deformation of the curves (Clusters and Blendshapes). markers are Following the Anim control, giving new “Layer/SIM” to edit or play around

e- Now the Markers are 100 Free / relative to world space . Edit the Animation Keys of it to play around.

… goshhh… RagDoll is so Power Full… I think productions still don’t see, don’t picture the power of it !!!

Thank you! I will carry on with the Snakeey Project!