I did start setting up my scene with 4 Soldiers…
My Maya went really slow !!! … can work on it…

Any tip/ trick to improve the performance?
Could it be the Proxy geo?

I have 4 references for the same Soldier (Each one has its own solver)
SLD01: SLD02:SLD03 SLD04
I added some barrels to add some props for the interaction and also a Rifle …

What’s the tip to handle this types of scenes? Should I break it down on Files per SOLDIER? 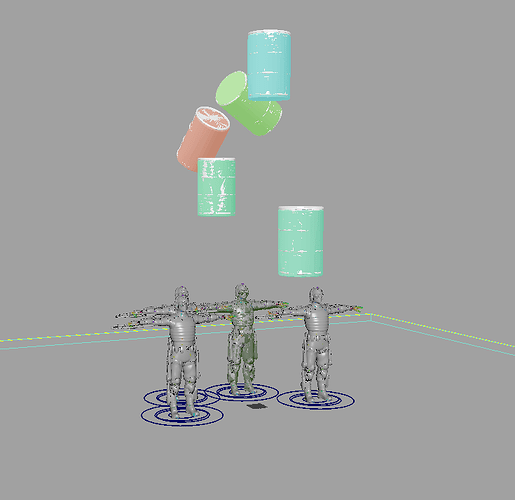 Not sure I understand the question

Is it slow because there is a lot in the scene? Can you help me understand these scenarios?

Okidoki!!! Problem solved !
After re assessing what I did and what was happening … nothing like starting from scratch/ clean.

I found out that the Weapon that i added it was the one caused trouble.
For now I kept the scene with 4 SLD and 4 barrels… running good enough.
17 fps (My laptop is old)

This is the weapon and the Proxy geo…
I am wondering if the cavity on the handling area could be the one that is causing the problems… maybe RG is trying to figure out the collisions with the hand. 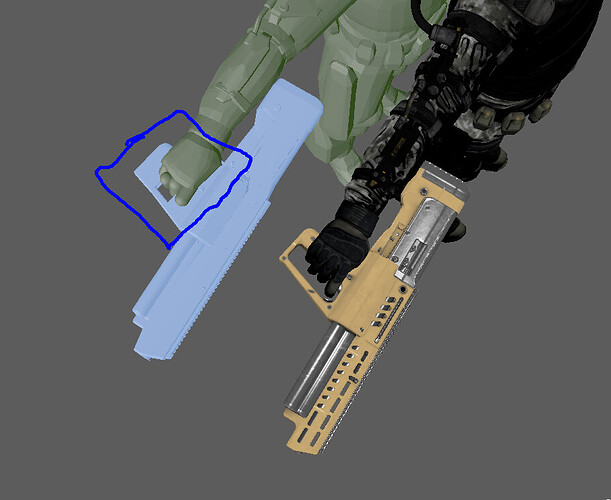 let’s see how this goes… I will omit the weapon for now to keep it light and simple, and later i can learn how to add it.

This is how I set my scene.
1- Set the scene with the barrels to create the ground and the Markers for the barrels. (And a MAIN rSOLVER)
2- Import my Swat_character and use namespace.
3- I did merge of the Solvers one by one so all the objects can Interact 9unless there is different workaround)
4- Group and organize the scene. 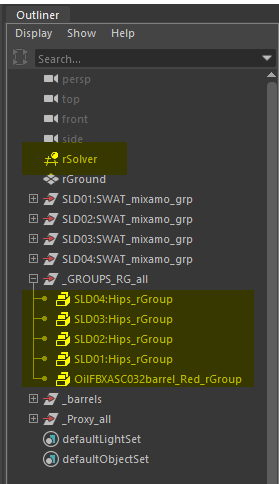 I am wondering if the cavity on the handling area could be the one that is causing the problems… maybe RG is trying to figure out the collisions with the hand.

Give them the same Overlap Group and it should be fine. If you did want contacts between hand and handle, you can separate the 4 sides of the handle, such that they each get their own convex hull. 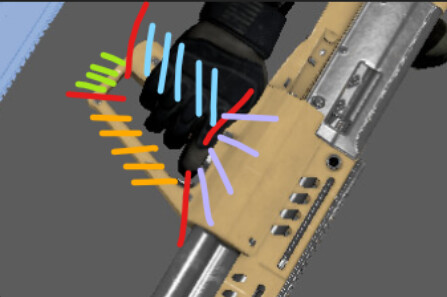 Perhaps not the most clear illustration haha, but there are 4 slices in the geometry there. You should be able to call Mesh → Separate and those 4 pieces should become their own Maya mesh nodes. That same mechanism is how Ragdoll separates between each of its internal collision meshes.

The next best thing is to use Solver Linking.

It has been a bit problematic at times and is getting an update in the next release (next week). But what it would enable you to do is keep the solvers intact without moving any markers. There would only be a single connection between two solvers, one having been “linked” to the other which includes it all into its own simulation. It is non-destructive, in that you can later unlink the solvers. Something that would be more of a challenge if merging solvers.