Markers AND Controls flipping out after recording

me again! I’ve got a very peculiar result when recording back to this particular rig.

So all the other controls record back properly except for the fingers. So the marker’s are set up on the joints and retargeted back to the controls. What’s strange is that not only are the controls broken after recording but so are the markers which are now flipping around all over the place. I’ve done it several times over to make sure it’s correct but still end up with the same results. Not sure what is happening. Any ideas why this might be happening!

Update: Switching to Retarget from Start helped, but still has some broken fingers which look like Euler Rotation type issues as they are flipped in 180 degrees.

I’m just about to head off for tonight, but could your controls have locked channels? Or those pesky Maya transform limits in the attribute editor?

If you call Ragdoll → Utilities → Extract simulation does the problem still appear?

The skeleton from the Extract simulation looks fine and orient constraining to them is fine as per last time. Now that you mention it, the Y and Z channels are locked on the finger controls. Only seems to be broken on some of the fingers though even though they are all locked the same way - but they might be it. I’ll unlock them and see if the problem still occurs. Have a nice evening!

Also, while I am here. Is there a way to limit the rotations of the markers in a way that isn’t symmetrical? For example, fingers and elbows shouldn’t bend backwards.

Unlocking the finger rotations fixed the issue! I’m starting to understand the process now. So if the skeleton cache is ok it’s basically something to do with the constrain and bake process in the record sequence!

Also, while I am here. Is there a way to limit the rotations of the markers in a way that isn’t symmetrical? For example, fingers and elbows shouldn’t bend backwards.

I have a rig where I use it to position a spline IK chain to be in an optimal pose before simulations start. I need it because the modeler didn’t model the geom this way and I need the rig to pose the joints.

I have a step where I bake out all of the joints first which disconnects it from the rigging, then apply the physics setup and run ragdoll dynamics. This prevents the rigging from borking the results of the recording.

@marcus It would be nice for the Record Options to offer this operation as an first operation before the actual Record operation. Thoughts?

It would be nice for the Record Options to offer this operation as an first operation before the actual Record operation. Thoughts?

Can you take me through the steps I can use to reproduce this in a new scene?

if the joints have an incoming connection affecting translate or rotate you can assume it’s still being driven by the rig. baking the joints then disconnecting the inputs before any of the recording steps is the way to fix this.

not sure if this is what you need/meant.
I think you must retarget the markers to the CONTROL RIG.

1- You can filter the Recording to not record on joints
2- You can create the RAGDOLL using the joints and retarget the animation to controls
3- You can tell the markers, to NOT record motion so the input connections are not affected. 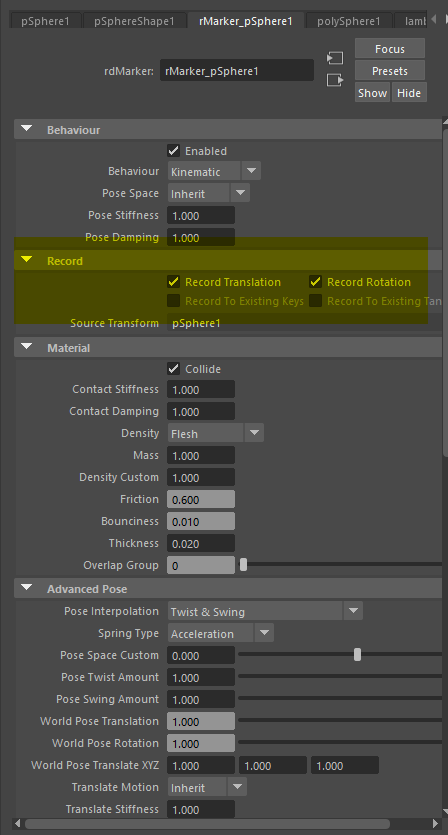 Final and from My experience building the tentacles set up: You will need to come out with a workflow to retarget the Ragdoll without breaking the RIG, so it is still editable with the Control RIG. If that’s the case… you can do a Transfer RIG and bake/ plot it back and forwards as you need it.

I hope this helps