Lets make a Stampede of Rhinos!

This will be a play by play on the progress…

What we’re going to go over ?

Why a stampede of Rhinos? … why not… But what do we need?

Reference in the Rig

Lets drop him to see the cool Jiggle

The TimeEditor is great for mixing clips.

This Loops your Clip

This moves your Clip

We’re currently in custom space this is a mixture of world and local and you can blend between them.

only the chest marker is custom the rest is local

Time to go a bit Advanced

In Advanced Pose in the AttributeEditor I Tweak some things…

NOTE! I could choose to have X , Y or Z Position still be effecting my Sim ( will go more indepth on this further down the thread )

Back to the Run!

Lets speed it up!

Moving clips over eachother blends them together MAGIC …

Lets add a Run at the end… just copy and past the first clip or import the clip again. Move the Run clip over the Gallop to blend them .

NOTE!! blending the clips might take some adjustment to get the transition timing just right

Lets see what we have without Editing

Ok time to adjust the timing.

I’m going to pump up the Pose Strength to get more glue on the animation input into the sim.

Time to bake and get some lights, cameras and see the action

Spaces are a way to pin your markers to your rig or just have the character wriggling around on the floor.

NOTE : The solver has been moved over to the side to better see input vs output.

Ok lets get into it. I’m only going to be changing the chest space to get the rhino to stay upright when running, you can change spaces on any marker.

NOTE! : notice how the the spine connected to the chest gets a bit loose ? if we use custom space this gets a bit more structured connection which we’ll see in … Custom Space

NOTE! : -1 on custom space = local space and 1 = world space and everything in-between is a mix of both - this value can be animated too.

Lets take the pose Strength down a bit.

World space and also Custom space (since its a mix of local and world) can be broken down into pinning in just World Translation xyz or World Rotation . by default they are both on.

Lets remove the World Pose Translation our rhino will now drop but will keep its rotation in world space this will help stabilize our rhino — are you trying to fall over? nope the rotation isnt falling over I’m not going to fall over … These values are found in the `attribute editor` for now

Our rhino is now staying upright and running forward AMAZING!

What happens when we turn both off? you guessed right! nothing holding it will behave as though its in local` space

Lets move our rhino around a bit… as you can see it’s following the X and Z but Y is free… if Y was active our rhino would be dangling in the air pinned to our rig.

This can be great for having more control over where your character is when planning out a shot.

Now that I’ve show you some space stuff here’s another way of working, keeping everything in Local Space not using World or Custom… Lets talk about PIN CONSTRAINTS

You might have noticed me dropping the word pin a bit… well this is why, Here is a workflow if you are finding spaces are a bit confusing. The results works in a way I’ve just been showing with spaces

I’m going to create Pin Constraints for anything that I want to be ‘Pinned’ to my rig.

Pins are a new shape that can be animated or constrained to anything. The Marker will Pinned to its location wherever that may be.

Lets constrain our pin to the Chest. This will now move where my rig is for perfect pinnage.

Pin Constraints have 4 attributes currently. They are :

By default they are pretty low … Lets make Translation Stiffness 1 and Rotate Stiffness 0 … look familiar ? and put turning up the Rotate Stiffness we get the feel of it holding to our rig as if it were in Custom space I say custom because the rhino still has its local strength holding the pose together nicely (remember the loose back?)

Lets freeform key frame these values to pin the chest back to the rig.

To show it’s pinned to the rig I’m going to have the rig move forwards – in the parts where the chest is pinned you can see it moving with the rig.

I’m going to do a bit more pin constraint workflow and lets get a bunch of these running down a gully smashing into each other! 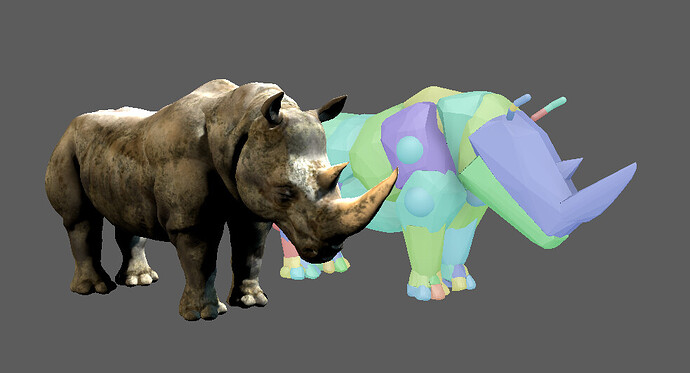 Here it is! I cleaned it up a bit for you guys. The Rig is just joints with skin weights ( who needs controls? am I right? )
RhinoRig.zip (5.1 MB)
Clips_Textures.zip (3.6 MB)

There are 2 animation clips in there that you can load through the time editor.

Any questions, please reply in this thread .