Okay so this is the first time I’ve encountered this. 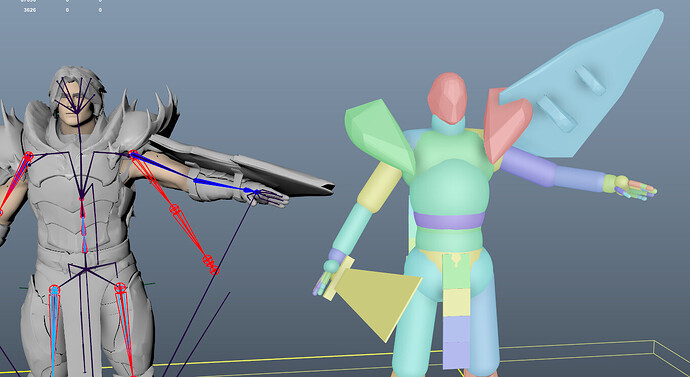 Basically as you can see the shield is way off into the air, the red joints ae IK and the blue ones are FK, and the default color ones are the actual skinned joints to the mesh. The shield is parented to the hand joint, and everything seems fine, but whenever I pose the character, the shield in the ragdoll sim is far off, like it’s getting a double transform or something, haven’t seen this happen before.

Also for some reason whenever I hit play my main character disappears, like it’s getting automatically hidden or something, any ideas?

Unsure, try parenting a new locator under the currently assigned control, zero out the rotate/translate channels and then Ragdoll → Edit → Reassign that control to the locator. Next, select the locator and the mesh and Ragdoll → Utilities → Replace Mesh to realign the mesh with this new transform (if necessary).

Also for some reason whenever I hit play my main character disappears, like it’s getting automatically hidden or something, any ideas?

Maybe the solver is in a display layer that’s set to hide when playing back?

Nope, that’s not working. I’ve even tried just using a random locator on its own and after the replace mesh function it will still inherit this weird double transform, but it’s only happening in Ragdoll

Ooh actually I think I narrowed down the issue. I actually think I fixed it.

I was using the actual skinned mesh to use the replace mesh function, instead of some proxy, so when I parent constrained the shield’s joint to my locator it was moving the mesh, and probably messing with Ragdoll and adding that double offset.

Okay yeah, that fixed it. I just had make a proxy mesh for the shield

When you replace the mesh, the is an option to “Maintain History”. Untick that and it should do what you expect.