Day 1 : Nothing to see yet, it’s my first day of learning ragdoll and I’m just working my way through the beginner tutorials, but I thought I’d help motivate myself by making my competition thread early. Good luck to all entrants 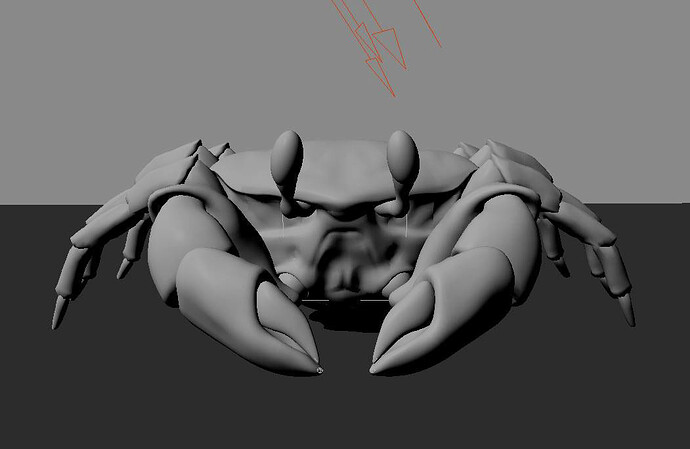 Looking forward to this.

Good luck and if you have any questions, I’ll be getting notifications about your thread.

I think what I’d like to attempt is a sequence with a biped character in a classic-cartoon / Tom and Jerry-style, where a crab has pinched someone on the finger or the nose and is dangling around and won’t let go and the character is freaking out trying to shake the crab off.

That will allow me to work mostly with a standard biped, which I’m more comfortable with as I don’t have much animation experience and I can have the crab itself be just a very basic setup, sort of floppy and flailing around, with one claw pinned to the main character. 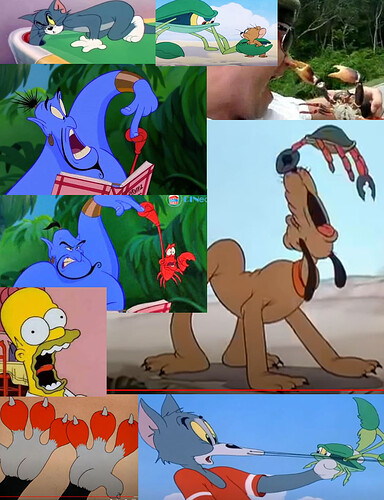 I’m going to try to use motion capture to create the main movement of the biped. I will be using open source, markerless webcam-mocap software, which is usuallly quite glitchy and needs a lot of cleanup, but I’m hoping Ragdoll might be a help with that.

The main goal is to try out Ragdoll with some low-quality motion capture and see if I can exaggerate the mocap into something more cartoony-feeling.

Here is my first test. I re-rigged and markered the crab and made a character and rigged him with Advanced Skeleton. Doesn’t move yet, but will attempt some mocap experiments this weekend.

Once the hand starts moving, especially like in the comics, I expect you’ll need to thicken up the “upper arm” of the crab to avoid having the weight of his body too reliant on something thin. I expect you’ll also need substeps to go with such fast motions, possibly up to 16. Other than that, this looks like a great use for physics.

Hahaha! Love this idea! Like Marcus said, this is a great use case for Ragdoll.

I’m not working with the crab yet, but I’ve been trying to work my way through the tutorials and demos just using hands.

At the moment I can only manage simple FK moves so next task is that I need to work out how to do IK and I need to learn how to do constraints.

Experimenting with constraints and a turbulence field.

HAHAHAHA!! This is great! one trick I do with Distance constraints is slowly up the strength value 0.1 is pretty strong… So from 0 to 0.1 I leave about 4 frames then after that I go from 0.1 to 1.0 over 4 more frames to soften the sudden effect the constraint has, Having higher values on the constraints Damping also is a good way to stop the constraint engaging too quickly.

Crab fights back! Trying some different collisions and fields. I’m loving how easy it is to set stuff up and test out different ideas.

Very cool stuff!! Soo many options! It’s great how Ragdoll let’s you explore different options, rather than being stuck with one

I find that leaving Stiffness at 0 rarely produces realistic results. It turns a character into less of something made out of flesh, and more of something made out of metal links, like a chain. Any fleshy creature, even when completely relaxed, still has some stiffness to it. Which is why I think the most realistic and good-locking version is where the character falls to the ground at 00:20.

Another thing that can help make fully relaxed characters more realistic is using limits, and tuning them just right such that they appear soft. Limits will keep a character in an anatomically plausibly pose, and they have their own Stiffness attribute such that when a character reaches the limit, e.g. straight elbow, it would softly keep the arm from bending the wrong way. Much like a real elbow. But, too strong limits produces the same metal chain look, so it’s a balance.

Hey @V4NDL0, your animation is getting some love on LinkedIn.

Ragdoll 2022.07.20 is out! This one makes life a little easier, a little more pleasant. Primarily a maintenance release. With a few nuggets in there! 🥰... 13 comments on LinkedIn

I had a try at reconstructing the shot I posted, of the chef putting the crab into a cooking pot, but this time using motion capture.
I filmed a take in my studio with just 5 low-cost basic webcams. The resulting mocap is not too bad, but lots of hand flipping and jerkiness

I cleaned up the shot and edited some of the moves in the Maya Time Editor and turned it into an fbx.
Then, I used that to drive an Advanced Skeleton rig and referenced that into a scene with the Ragdoll Dynamics markers. The ragdoll does an AMAZING job of cleaning up all the jerkiness and glitches.

This shot is the mocap with some constraints on the hands but not much else, no limits on the joints yet or refined settings and it already looks pretty good. Somehow I have messed up the crab, it’s not performing nearly as nicely as in the previous anims, I must have set something wrong but I’ve run out of time…

and here is a quick render test with some Marvelous Designer clothing and stuff, showing where I’m heading with the eventual shot.

I guess my actual submission should be the previous shots I worked on, because there is more actual Ragdoll Content and features at play, but I’m excited to bring all that together with the mocap when I have more time. Good luck everyone.

Holy mowly, this is amazing! Haha, you cannot tell me you aren’t a professional chef; with moves like that!

The Marvellous sim looks really good too, great synergy between the two solvers.

Can you tell us more about how parts of the character are driven? Is everything dynamic, or are there Kinematic markers in there too? Looks like the hip and torso are kinematic, whilst the legs are still dynamic? I expect you’d reduce mocap jitter even further by letting everything be dynamic, at the expense of more wobble. Especially to keep him standing/walking.

no limits on the joints yet

With limits, you could see some benefits, but there are also a few pitfalls. For example, hands could clean up better with limits, as they’d be prevented from bending any other way than natural and realistic. But oftentimes mocap can produce orientation that look good on a skeleton or capsule, but that’s got a lot of twist! Things that won’t show up until things are skinned to a character. And although a limit could prevent that kind of thing, often times the rest of the rotations are based on this extreme twist and so they’d end up removing large parts of the overall motion.

That’s been my experience at least, it probably depends on what was used to capture the motion. Your human physical body will have natural limits, so in theory it should be a matter of defining those which should keep mocap from misbehaving.

Curious to see your results here!