Blend between tail animation and dynamics

Hey all - how can i blend between animation and ragdoll dynamics on a tail for example? Ive tried many settings, stiffness etc but cant figure it out. I have a tail pose but can only have Kinematics or dynamics…would like to blend like 80% to the anim pose. 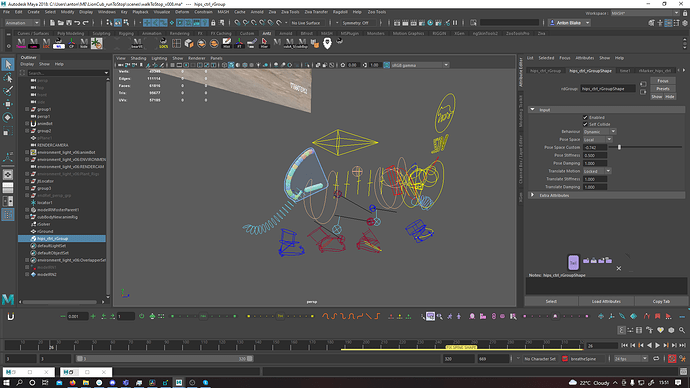 To blend, here’s what you can do.

Other more dynamic options would include increasing Pose Stiffness on the whole group you’ve got selected there, and/or setting Pose Space = Custom which would make the tail try and reach both the local rotate values between each control, but also the worldspace position and orientation of the tail. That should enable you to get the tail much closer to the animation, at the expense of realism. Ultimately, any blending is at the expense of realism, so you’ve got to basically pick your battles.

Thanks Marcus. So the technique above works great, however my default dynamics isnt what im after. Is there a way to stiffen the tail dynamics a little so instead of a ropey feel, it feels like theres muscle inside.

I tried playing with the scene scale and various options but no success yet. Is it something on the controls themselves?

I changed the pose stiffness on the group you mentioned but it doesnt change anything. I ramped it way up to the 100’s - nothing.

Hm, it’s too small to tell, but the size of each marker affects the behaviour too. Is it possible that the first few capsules are very small? E.g. if the first one is very very tiny, and the next one is 100x larger then the stiffness between them would be next to nothing.

You’ve also got a very deep hierarchy of controls there; if you assign to every 2nd or 3rd control, you’ll get both more stiffness and less high frequency kinks in the tail.

I had a little play with Rotation Mass @marcus might be able to explain how it works better than I can… at default it’s off… -1 but by giving it more mass is as if the marker is much bigger than the current shape so it’s harder for the marker to rotate… or needs more force? I’m sure Marcus will jump on here with a proper explanation … 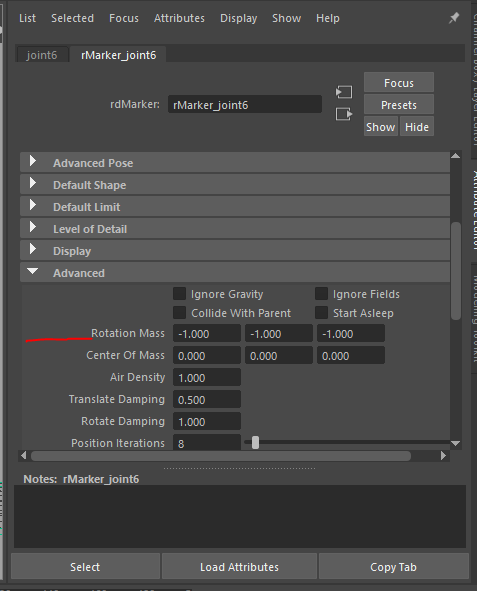 I just upped the Rotation Mass to 1 on x y z in this video,

Notice how low my pose stiffness is.

Yes, hah, I’m not sure about a proper explanation, but I can confirm this is true.

When you increase the size of a marker, you indirectly increase the Rotate Mass, and that is the property responsible for how much of an effect Pose Stiffness (can also be thought of as Rotate Stiffness) is able to achieve.

Rotate Mass is also called Angular Mass and has a section in the docs here.