Retargeting to IK not working

so I’m currently trying to retarget to IK from joints. Its a back leg quadraped setup (digitigrade). At the moment the two pole vector controls don’t seem to be retargeting correctly to have the thigh and calf align with the ragdoll sim. Constraining the two pole vectors to a baked out simulation does the trick but obviously not ideal. Is there something I’m doing wrong or a better way to do this?

Hey @gang, can you confirm which settings you use to record?

If manually constraining them works, that sounds like maybe From Retargeting is checked? 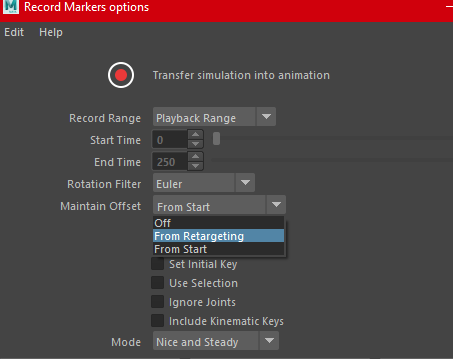 Recording From Start would try and do what you would do manually, of using a Maya Parent Constraint with its own Maintain Offset checked. So wherever it is at the start of the simulation, that’s the position it should try and stay at.

If you are able to reproduce the problem in a smaller scene and either screenshot this, or send it, I could take a closer look!

To elaborate on what From Start does, consider this example.

In the above video, the character is in it’s A-pose where FK and IK controls have the same position and orientation. Upon recording, both FK and IK controls will be parent constrained to the simulation and baked out. All is well.

But now look what happens when I change only the FK control.

Notice how as I blend between FK and IK, the leg moves? Because I haven’t actually moved the IK control, it’s still in its A-pose. But now there’s a difference between IK and FK controls, and because we parent constrain with Maya’s Maintain Offset this difference will be preserved.

To solve this, you can either ensure that all controls are in the same position at the start of your recording, or you can try the From Retargeting option.

This option will ignore the start position of your controls, and instead look at where they were at the time of retargeting the control, which per default happens when initially assigning to it. The assumption is that the character is in its A-pose at that time, so that the controls would have the same position and orientation.

This was and would still be the default behaviour, if it wasn’t for the many edgecases surrounding the actual position of each control… This option does not handle…

And that’s a lot! A well-behaved rig would not use any of these, so in many cases - perhaps even yours - these limitations aren’t limitations at all. But, in other cases one or more of these are in use, which is why we instead rely on Maya’s own Parent Constraint to handle things.

I’d like to have this addressed at some point, but it is a hard problem. So until then, From Start with this caveat is what I’d recommend. And a most robust option would be to have a dedicated space - e.g. FK, IK and Physics - that the animator can record onto without touching the IK nor FK controls.

sorry about the late reply! On first check this seems to do the trick. Will test this some more but hopefully this was the issue