I’ve tried to create a crawl animation based on a one-arm input( if it possible). So i pinned main body control and changed a stiffness value to 0 so ragdoll could receive an initial input from arm animation to move a whole body as a final output. So i got this…

I changed bounciness value to 0 and increase Dumping as well. Also, I set Rsolver Air density to 1. But it seems too bouncy for me.

Here is another test of what I should achieve though. It was done by animating pinned body controller.

Is it possible to achieve body simulation transform along the path without any bounce instead of keyframe the body control?

He’s on the moon!

Welcome to the forums @YuriyF

The main problem here isn’t bounce, but gravity. Gravity is based on the size of your scene, which defaults to 0.1x. That is, if your character is 180 cm tall, it would be treated as 1,800 cm tall. A giant!

To resolve this, reset your scene scale to 1.0; this can also be set permanently in the Assign Marker options UI.

With real gravity, you’ll likely find it more challenging for him to pull himself along. For that, you can try Ragdoll → Select → Markers and set their Friction = 0.01 or some really low value, except for the arm which can have a higher friction.

From there it’s a matter of tuning the animation such that he drags himself forward. Working with pins in this case will likely end up looking artificial, like he’s being pulled by some invisible force. So working with friction and the animation itself should yield the best results.

Thanks for the reply Marcus. I’ll try to understand the logic based on your explanation.

Scene Scale is this one here. 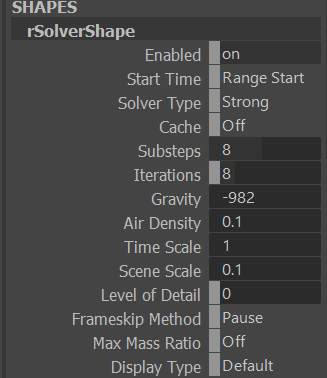 You should see an immediate and strong effect by setting this to 1.0

Look at all those guts!

Here’s what I’ve got so far. Still feels a quite slippery

If Friction = 0 then it would as if he’s made out of ice and is sliding on ice. A value of 1.0 can be thought of as 100%, two very rough surfaces sliding against each other. Values can go beyond 1 as well, but probably shouldn’t exceed 2.0. That should get you a sandpaper-vs-sandpaper feel instead.

For the intestines, I’d imagine they would be a good fit for a higher damping than usual, experiment with 10+ values there. It’d make them less floppy and more soggy.

On the solver, you’ve got an Air Density value that should have a significant effect as well, it might help make things a little less floppy overall.

Gravity still seems a little low to me, I’m unsure of your scale here and whether your grid values are inches or centimeters, but experiment with doubling the Gravity value. It’ll make him more grounded and attached to the ground.

Other than that, another thing you could try is putting a pin constraint at every position you intend for his hand to grab onto, and animating them on and off as he approaches. For example, when he reaches and has just extended his arm, you’d activate a pin at that position to keep the hand from losing grip. Then, once he has pulled himself forward, you could animate the translate stiffness of that pin to 0 and repeat the process for the next extension. That would allow you to both control exactly where he grabs onto and could enable you more flexibility over friction and gravity settings, without breaking the look.