Pretty new to using the tool and have been playing around with setting things up for a couple days. I’ve been having this issue with using limits. They don’t work with my character, but I have no clue as to why. I’ve tested with manikin and it’ll work just fine on that character.

Hi @Devin, welcome to the forums!

I think you might be seeing this issue here, I’ve made some video examples of it in there as well. Let me know.

Ok, it’s an issue of these limits not being strong enough to carry that heavy upper-body. They are tuned for a regular-sized human characters to remain semi-soft - like soft tissue - and to not look too robotic. As soon as a limb goes outside of its limit, there’s a spring created to try and pull it back. If that spring is too strong, it looks less like a human limit and more like a mechanical limit. It can be a bit of a balancing act finding a value whereby they remain soft but not too soft. I…

Thanks @marcus, that those examples you had in that thread worked!

Also based on that thread, the problem could stem from the marker’s mass?
The masses on the markers seem to be quite…large: 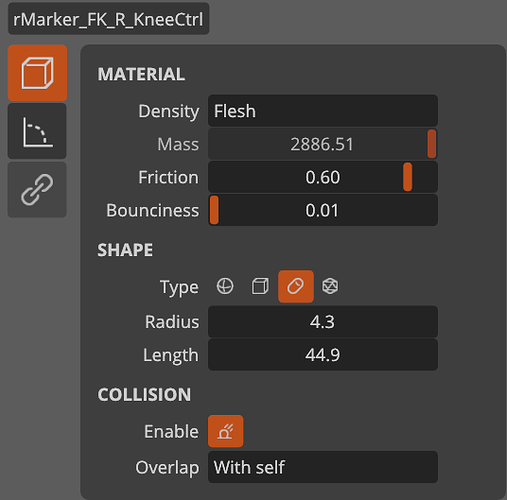 What are way’s I could affect the mass to be more real-world?

For reference, this character is about 180cm and I’ve set the solver scene scale is set to 1.0

They do get quite large, but generally you don’t have to worry about the Mass attribute when it’s auto-computed, only about the size. If the sizes are real-world, the simulation will be too. Internally, if all masses at 10x larger, it’s as if nothing has changed. It’s their relative masses that are important, such as if the hand is 10x heavier than the arm.

Alternatively, you can set Density=Off and set your own mass per Marker that is real-world, that for a character 180 cm tall would total 80 or so kg.

Thanks for the tips!