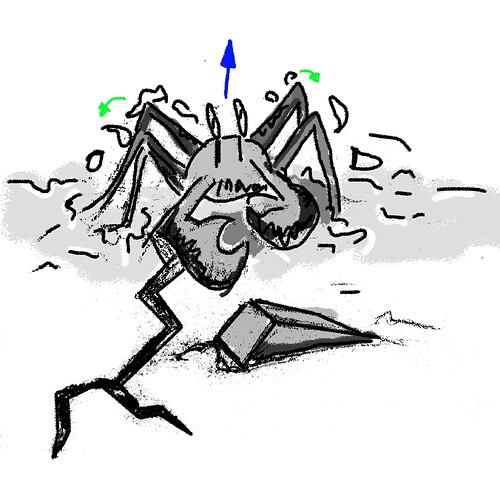 godzilla_crab_concept_v011824×1824 237 KB
I’m a little late to the party, but I already did now and then some research on the ragdoll tool. It is sometimes difficult to continue for hours after work in my spare time, especially when the weather is so lovely and hot

See here an introduction video. During my runnings, I always get the best ideas

Here’s my first ragdoll test. I tried to make the crab come out of the ground with blocks that were then made dynamic.

I want to give it a big godzilla feeling, so I give it a slow-motion feeling with a time remapping on the recorded simulation.

The next step is to watch some more tutorials to get a better grip on the tool. For now, I mainly used the pin to animate the legs and body. I want to see if I can push the performance further, perhaps by animating more pins or other tricks that I can figure out by watching more tutorials.

And maybe in the end I might put a mouth on the crab so I can make it roar!


I finally did another test. This time with a scattered environment. The big trick for breaking the environment with some hold was to switch from kinematic to dynamic. I thought it would blend but turns out to be an off or on switch. I am still happy with the result. As an extra I also gave the arms pins to animate with.
3 Likes
Ragdoll July Challenge
marcus 22 July 2022 07:06 #2

Hello @ZiggyDeutz, a warm welcome to the forums, and thanks for that lovely introduction!

Wish everyone did that, how great that would be.

Thanks for posting your progress! This is a great idea.

I want to give it a big godzilla feeling, so I give it a slow-motion feeling with a time remapping on the recorded simulation.

Got some good news here, there’s both time remapping and scene scaling built straight into the solver.

For scene scale, if something is large, then it’ll act large.

You can achieve a similar effect with Time Scale. (Which can also be animated!)

The big trick for breaking the environment with some hold was to switch from kinematic to dynamic.

That’s a good approach. An alternative is setting their Pose Space = World and giving it a few frames to come to rest before breaking through. Then you can animate Pose Stiffness to 0 to let them go. That will be closer to a blend. You can also give each piece a Pin Constraint and animate that to 0 for the same effect.

Hi @marcus thank you so much fr your reaction. That are really nice tricks I can play with. I will definitely try the big scale for the crab, with a measurement of a building. And that time scale is an awesome option, I love it

My aim is to have a new test next week. I don’t think I have enough time to really make what I want before the deadline. I think I will continue after the challenge to achieve a nice end result.
And as I said, it is sometimes difficult to spend my spare time on animations after work. But I will give it a shot anyway and deadlines do help to push

Thanks and I will keep you posted

If you end up scaling the crab past 2-10x you might find the crab starts to freak out. To address this, make a quick tweak to this attribute related to mass.

You can use this menu item to select all markers. 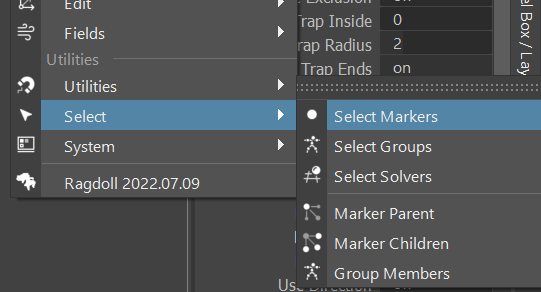 And the Attribute Spreadsheet to edit the Angular Mass XYZ attributes. 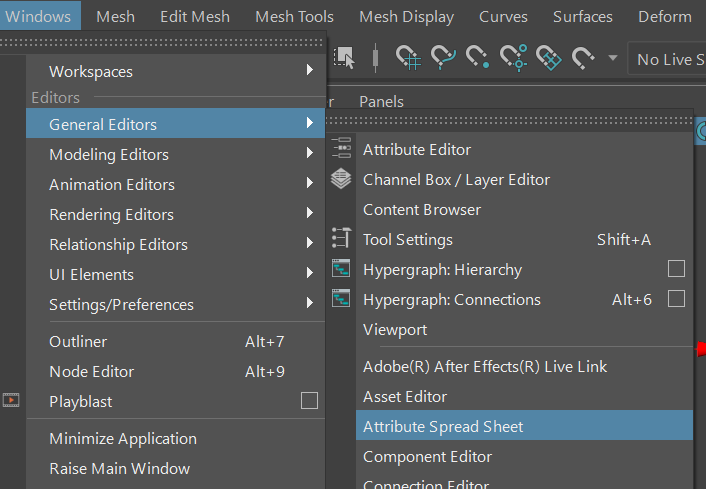 This is uniquely related to the crab, normally this attribute is already -1 which means the mass is auto-computed. For this particular crab, it can help to make the legs stronger. You can also experiment with higher values, such as 10-100. Depending on how much you scale the crab.

thanks again for the tips @marcus . I like the crab scale now in the scene, but maybe it’s too big. I think I want to try a smaller scale. But I am already happy with the slow movements.

Nice one. Yes the scale might be a tad too large, because it looks like some of the debris isn’t spinning the way they should; they are flying straight up, rather than rotating. Unsure why that is.

But the crab motion looks very cool. I wonder if the debris is overly heavy? It looks like some of it affects his eyes as though they were made out of led. Have you adjusted any density or mass?

Yes, the debris is definitely not working the way I wanted. I struggled a bit with it, because it didn’t fall with gravity anymore, instead, it was flying. So then I tried to make it heavier like a black hole :P. I like how the crab reacts to that, but it’s of course a bit extreme.

Yes finally. I did a little jump in the air when I just got this result. This is finally starting to look like something I can use. From this point I want to work it out and polished it. 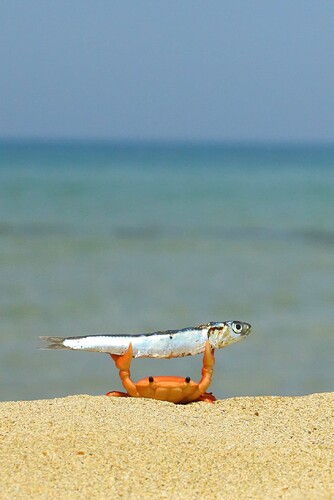 Animation on the character is all done with pins on the leg and body, just a couple of keyframes

Oh, and some extra keys just on the FK bones.

You’ve got a few more days to use the free Unlimited licence here, such that you can record your results past the 100-frame mark that the Trial version is limited to.

just another update. played with some settings of the debris

Would you mind if I or you re-uploaded the video here? External links tend to disappear over time, and this one is a keeper.

It’s funny, I thought the human-character you’ve got there is our Manikin rig.

Here’s the upload of the godzilla crab. I had to make the video smaller because it was too big.
Oh yeah, I used the manikin straight from cinema 4D, I didn’t know you also had a rig from it. Thanks for sharing the manikin rig link, good tricks are described there too.