ever so fun playing with rag doll. Here’s more tests!


I probably will go back to rig to adjust the solver for better definition. There should also be another crab grabbing poor goldfish ( Truong) btw, this is maya2023…

will try that! thanks for the tip!

Cant get attach or distance constraint to work.

Cant get attach or distance constraint to work.

Would it be possible to share what didn’t work?

Looking at your videos, I get the feeling that physics is being forced quite heavily by worldspace pose stiffness and Pin Constraints. I took this for a spin to see whether it’s possible to let physics have a little more influence and came up with this.

The only thing animated here is the motion path, to which the head is constrained. The rest is vanilla physics. You’ll noticed the head is Pin Constrained, and that it’s the pin that’s following the motion path. The rig itself has also been constrained, but that’s just to keep the controls visually closer to the sim and doesn’t actually affect the result.

It could be improved further by assigning to the underlying joints of this fish instead, as a lot of the controllers are driven by multiple parent controllers. Which makes sense if you were hand-animating these fins. The fins are also flat, which would be replicated with flat boxes or flat meshes. In this case, I only made the front fins flat. The result of leaving the others as capsules is that they twist as easily as they spin which isn’t accurate and looks a bit off.

In your videos, it also looks like your capsules are too narrow, that they don’t represent the volume of the fish. This can cause both unnatural motion but also heavily different masses between the capsules. So long as they match the fish, you’ll get the behaviour of a fish. If they match that of a piece of jewelry or a bush, they’ll act accordingly.

About the fish setup, i agree its poorly setup. I should the slicing tool to make a better ragdoll. Shud try that next.

For the pin and distance. I made recording. Ha! Let me try to put it up!

hmm, they kinda work when I tried on an empty scene at origin.
the only thing i do different this time is baking ragdoll animation so the controls and ragdoll is matching position.

let me know if you see something i can do better!

upgrades! thanks for the tip for flat surface and boxes!! @marcus

It took the ride !

if you chance the Pose of the CRAB legs , like more straight and animate the stiffness of the GRPS it will give you nice overlaps.!

upgrades! thanks for the tip for flat surface and boxes!!

You can set Gravity = 0 as well, no need for that under water.

hmm, they kinda work when I tried on an empty scene at origin.

Hah, yes I see what you are expecting to have happen.

Let me try and break it down.

When you make the Attach Constraint, you’ll find a new child locator, parented to the parent control.

You can move this around after it’s been attached, and Ragdoll will try and keep the child Marker where this child locator is.

You can animate this child too, which is where things can get more complex but also more powerful.

In some cases, it may make more sense to both Attach and Parent Constrain one control to another.

Notice here that now we’ve attached the box to the character in both Ragdoll and Maya.

How do you get the Orientation Markers to be drawn that big on the MotionPath? They are tiny when I create the path in other scenes.

Orientation markers? Is this something in Ragdoll you are looking for? Or native to Maya? I’d imagine Maya has an attribute to control their size.

Yeah, the native ones, that are visible on the motion path - could not find a size adjustment anywhere.

But, actually , more importantly, wanted to ask how did you constrain the head’s Pin Constrain to the motion path? I can see your Pin Constrain is in some group, while the default Ragdoll Pin is created without the group. So it does not let me attach the Pin to the Motion Path.

The scene file is attached above, you can take a look.

The Pin Constraint is a normal Maya transform, you can constrain it like you constrain any transform or control or joint to any motion path. You can parent it under a new group as well, and constraint that instead. I think that’s what I may have done? Such that you can move the pin constraint around after it has been constrained.

If I create a Pin Constrain and attempt to attach it to the Motion Path its says: rPin.translate already has an input connection

It’s probably already constrained? Are the translate channels blue? Try deleting the constraint that’s under the Pin Constraint in the Outliner.

You can customise how pin constraints are constrained (or not) in the options. 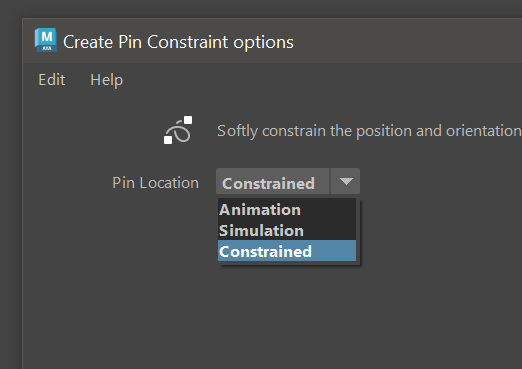 Aha, that was it) Thanks so much!

When it is constrained, it will be constrained to your character control. So you can also attach your control to the motion path, and the pin constraint will follow.